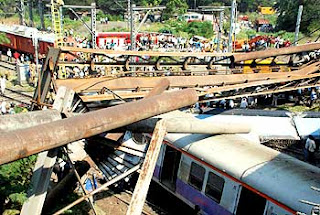 Yesterday was a horrible day for most of the commuters who are dependent on Mumbai's only life line 'The local train'. A bridge (the one supporting water pipes) between Thane and Mulund collapsed on a train killing motorman, Ramachandran Iyer (age 43), a fellow resident of Dombivli. He got crushed under the girders that fell on the train.
My heartfelt condolences to the family of Mr.Ramachandran.
His life could have been saved had the rescue operations acted swiftly. His hands and legs had to be amputated to get his body out. ;-( The rescue team came on site after 3 long hours after the incident took place.
Would this lethargy had happened if a Marathi Manoos was battling for his life?????
Had a harrowing time reaching home. Left Sakinaka in car @ 8pm and came to Thane battling hell lot of traffic. Had to coax the driver to take us till Kalyan as the train service had come to a halt. He reluctantly agreed. Else had to cool my a$$ on Thane station. Took the Bhiwandi-Kalyan highway where the traffic refused to move even at snail's pace. 10...11..12...1.. Finally reached Kalyan station at 1.10am. Took a rick from there to dombivli which made me poor by 100 bucks.. ;-( Finally reached home at 1.35am..
total travel time: 5.35 hrs... but realised 'Thank god its Friday'.. oops Saturday..
wonder if life in Blore was better..... ;-(
image courtesy: rediff.com
Posted by Ashwath at 2:22 AM No comments:

Well, I am back to write a blog after a sabattical of almost 1 year. A lot has happened in the past 1 year. Have moved out of Bangalore to hunt bigger? dreams and now in Mumbai with my parents. There was no great inspiration for writing a blog. Not that many read my blogs, but there wasn't anything to write. Thought of closing down this too... Anyways, Life moves on...
p.s. Have tagged this blog with pamela anderson, sex, namitha and MNS. ;-) selfish way to increase indexing of this blog. Sorry for those who landed up on this blog thinking of something else.
Posted by Ashwath at 1:54 AM No comments: